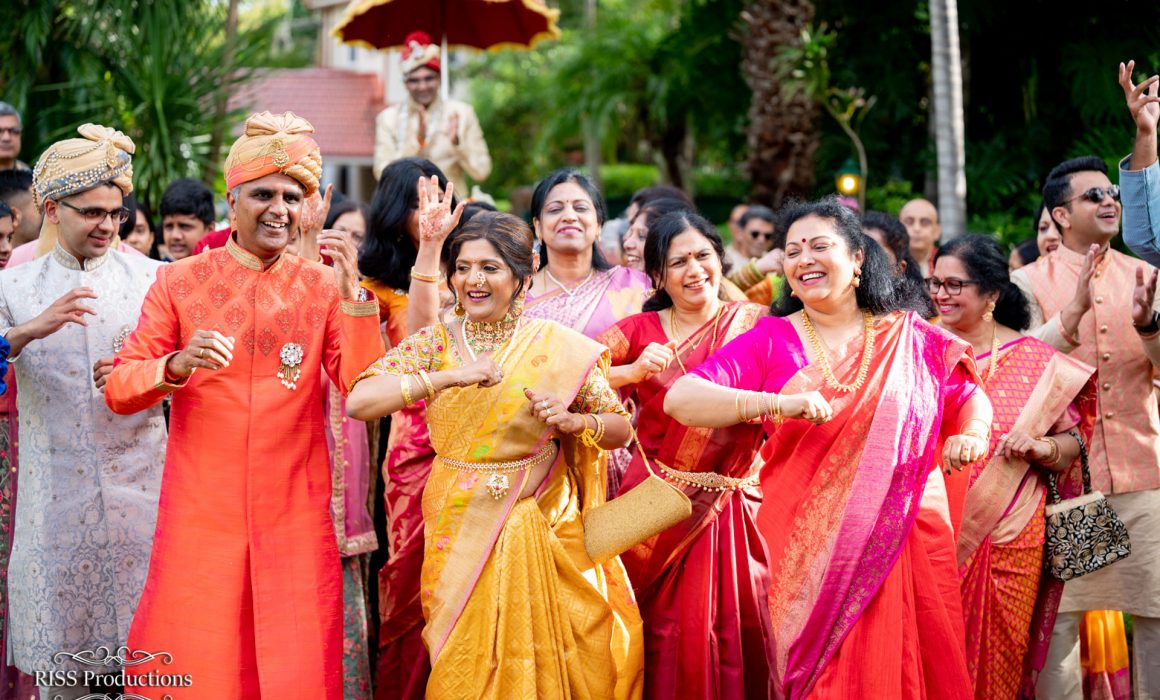 Wedding photography is always a happy task, and mostly, great fun. It feels good to see the happy couple, the friends goofing about, families sizing each other up, and whatnot. Weddings provide plenty of amazing photo opportunities, where photographers like us can experiment with the light, numerous poses and capture some truly memorable moments. Hindu weddings are especially exciting, as there are numerous rituals associated with them, and it is full of color, music, dance, and of course, awesome food.  We had the opportunity to shoot one recently, and we were completely blown away by the experience. So here is a brief peek into it. First, we’ll tell you what we loved about the Hindu wedding ceremony: 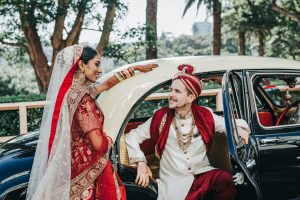 If you ask me how long does an Indian wedding ceremony last, I’d say a couple of days – at least two!  Not continuously, of course. There are a lot of rituals and customs associated with Hindu weddings, and of course, the main wedding ceremony itself can last a couple of hours. This gave us plenty of time to get in some great shots of all that was happening on the stage – called the mandap – and some excellent  with our  Candid Wedding Photography. 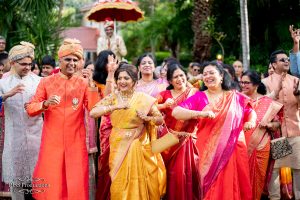 Now this is what we loved most about the Hindu wedding ceremony: it was a riot of colors. Bright reds, yellows, greens, purples – all embellished with shades of gold for a dazzling look. From the outfits, to the rangolis or the geometric designs made on the floor with different colored powders, the strings of flowers, the tiny earthen lamps called diyas giving out radiant light – it was one huge party of colors. I was told that each color has a significance and meaning of its own: like green is auspicious, and stands for plenty; red signifies passion and new beginnings; yellow is the color of purity and chastity, and so on. Two colors you are highly unlikely to see in a Hindu wedding are white and black as they are considered inauspicious. All of this was very interesting information for us indeed

We were pretty amazed to see how almost each member of the family on both sides was involved in some part of the ceremony. Parents of the groom are greeted and welcomed by the bride’s parents, and they are in turn greeted and thanked by the groom’s family. The young female relatives of the bride stalked the groom, and the moment he took off his footwear to get onto the stage, they grabbed them and ran away, and pestered him for money to get his own shoes back. The groom’s sister helped her brother tie the ‘mangalsutra’, a long necklace that is a symbol of a married woman, and the bride’s brother twisted the groom’s ear, threatening him with worse if he didn’t take good care of his sister. We found the last one absolutely hilarious. At first, we were a bit shocked, but then realized it was all part of the game. There were many other rituals too, where even aunts and uncles had roles to play. It was an amazing experience to know this and see it happening, and thought it really cool. 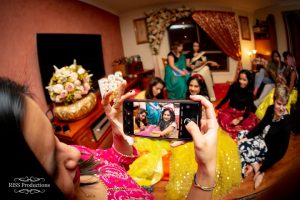 The bride and groom themselves have to participate in several rituals for the main wedding ceremony. The bride was brought onto the stage draped in a yellow sari, by her maternal uncle who had gifted her the sari. The tying of the mangalsutra was preceded and followed by many rituals. We’d like to share a couple of them. The bride and groom had to perform a worship called lajja homam, where they had to join their palms and slowly pour puffed rice and ghee into the sacrificial fire. Then they took the Saptapadi or seven sacred vows that both the bride and the groom make to each other, with each vow being an important principle important to marriage. The couple hold hands, the groom in front, and they go round the sacred fire 7 times. The bride then went and changed into a green sari which was given to her by the groom’s family. Both bride and groom are seated, and the family members tie a long piece around them both thrice – tying them in the relationship, so to speak!

Then there was this ceremony called ‘Oti Bharne’ or ‘god Bharai’ where the groom’s female relatives gifted the bride jewelry, or clothes, along with rice, vermillion, a coconut or an apple/orange/any round unblemished fruit. I was told this is a fertility ritual, and asking for blessings for her womb to be blessed with new life without much delay.

When the couple sat down to have their food, I saw that their tables were decorated with rangoli, and flowers. Then they had to feed each other a morsel while friends and family hooted and cheered.

Everything was new to us, and presented exciting photographs opportunities too. If you are interested in Wedding photographs they capture your precious moments and turn moments to lovely memories.

I was told by one of the groom’s friends that this was a Maharashtrian style wedding; and those customs and rituals differed according to the region that the bride and/or groom belonged to in India. Like in Tamil weddings, I believe the bride is seated on her father’s lap, and in North Indian states, the groom comes to the wedding on a mare, and the bride garlands him as he reaches the wedding stage.

But many concepts are the same – especially that of kanyadaan, or giving the bride away, as we have here in Australia; tying the marital necklace, the sacred vows, and going round the fire. 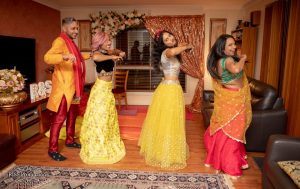 The Hindu pre-wedding ceremony is just as colorful, if not more.

The Mehendi ceremony is of prime importance for the bride, as she gets henna tattoos on her arms right up to her elbows, and her feet and legs up to the ankles, and sometimes even a little higher.

The Sangeet ceremony is usually held together, the previous night of the wedding. Family members and friends sing and dance, and often there is some serious competition between the two groups. It’s a night of fun, with no religious ceremony happening, and a time for the families to let their hair down and get to know one another.

So, there you have it! These are the things we loved about shooting a Hindu wedding ceremony. It was a beautiful experience, and a learning curve too. Here are some things we learnt, which we felt was really great:

We are all set, and really looking forward to our next Hindu wedding ceremony shoot. Our experience has taught us how to go about it and being mindful of the do’s and don’ts.

Are you a Hindu bride or groom or family member with a wedding in the family? Call us now for a quote!